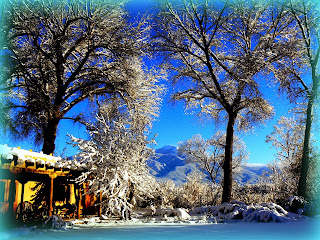 With Christmas fast approaching, I thought I'd better take a moment to let all of you know whats happening in Taos over the next week.

There will also be the traditional "Taos Pueblo Procession of the Virgin" and Vespers at the San Geronimo Church as well as the Bonfires, on Christmas Eve (4pm approx start).

Obviously with Taos being Taos, there are also some interesting art displays and workshops to attend. This weekend there will be a demonstration by Taos Pueblo Potter, Pam Lujan-Hauer, of her clay pottery at the Taos Art Museum. This highly regarded potter, attended the Institute of American Indian Arts and was inspired by her Great-Aunts, Josephine Ortiz and Anita Lujan. Admission is free and is a real opportunity to see some wonderful, traditional pottery, up close.

This Saturday (21st Dec) there will also be a performance by two time Grammy award winning flutist, Robert Mirabal.This performance, being held at the Taos Community Auditorium, will be accompanied by dancers from the Jemez Pueblo and will be an evening of traditional flute, dances and song. The performance entitled, "Blue Corn, The Journey" hopes to convey how the culture associated with planting seeds and harvesting them, combined with family, helped him on a new creative path. The performance will start at 7pm and tickets cost $22. Please call 575-758-2052 form more information and tickets.

Obviously, ski season is well underway, and for all you ski and snowboard junkies, Taos Ski Valley has you covered! Starting tomorrow, there will be demo days allowing everyone to try out some of this seasons latest gear. There will also be the 18th Annual Brew Masters Festival! This festival on the 21st, will feature 18 different breweries from California, New Mexico and Colorado! And lastly, the Christmas Eve Torchlight Parade will be taking place just above lift 1 from 6pm!

Hopefully, there is enough to keep you all busy while you enjoy your Christmas here in Taos!